To: All Represented BMRF/B&P Employees

Re: Discipline at Comparable Non-Represented Sites

You have undoubtedly heard the Union Committee proudly proclaim that they “saved someone’s job,” but it might surprise you to know that discipline is less frequent and less severe at our non-represented sites. We cannot – and will not – make promises about what would happen if the Union is decertified, but the statistics show there is less discipline at non-represented sites.

First of all, our represented and non-represented sites follow different disciplinary action guidelines, and if you review the disciplinary action guidelines at the four Beaumont facilities, you will see that the guidelines at comparable non-represented facilities are less severe. By example, the retention period for each level of discipline is lower at the Beaumont Chemical Plant and Polyethylene Plant than the Beaumont Refinery and Blending & Packaging Plant (illustrated below). 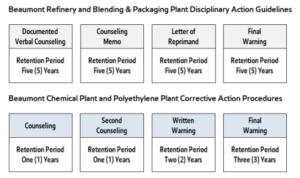 Second, if you were to audit the personnel files of all active wage employees at the four facilities as of YE20, you will see that employees at our non-represented sites had significantly less discipline on file than their represented peers (illustrated below). 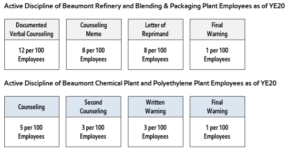 We are not saying that the Union is the cause for the higher level of discipline; however, the statistics don’t support the Union’s message that more discipline happens at non-represented sites.

So next time you hear the Union claim that they “saved someone’s job” ask yourself:

Have you ever seen the Company terminate an employee without just cause?

Any questions related to the employee led decertification effort can be submitted to Beaumont Area HR Department at  Beaumont.Area.HR@exxonmobil.com.